Hear from Kim & Lorna, two of our recent Contact Management apprentices about their experience

Hear from Kim & Lorna, two of our recent Contact Management apprentices about their experience 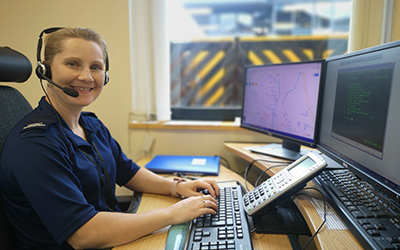 Meet Kim & Lorna, two of our 999/101 call handlers who have undertaken our Contact Management Emergency Services Call Handling Apprenticeship – Kim is at the early stages of her apprenticeship whilst Lorna has just completed hers.

What were you doing prior to becoming a 999/101 call hander?

Kim: I joined the Army at 19 until I decided to work in the MOD – after 17 years, I decided to try something completely different and applied to Thames Valley Police.

Lorna: I’ve had quite a few jobs. I’ve worked in pharmacy, insurance, banking, bars – I’ve literally done so many different things and all through that time wanted to have a job that really made a difference to people.

Lorna: For me this was an ideal fit to make a real difference, work within the policing family but also have self-improvement (through the apprenticeship). I had wanted to do call-handling for a very long time, but because I didn’t have my maths GCSE qualification I was initially unsuccessful. When the apprenticeship was introduced, I jumped at the chance to reapply.

Kim: I applied for Contact Management because I wanted to do a job that felt worthwhile and would really make a difference to someone’s life – knowing that you’ve been there for someone at their time of need. It may be the darkest moment of their life and at that moment in time, you are there for them and will be their support until the Officers arrive.

How did you find the training?

At first I thought ‘I’m going to have to learn a new job and my apprenticeship’ but actually it’s purely around what you do so it fits in really well, you don’t feel pressured or overloaded in any way.

Lorna, you had to do the maths GCSE alongside the apprenticeship – was that hard work?

It was a lot of work but not as much as I had built up in my mind that it would be. Initially I felt that I would be doing all of this extra work and had worries about not passing, the consequences of that on my apprenticeship, but it isn’t like a maths class when you’re 15. You have 1-1 tutoring and it’s taken very much at your own pace. I had absolute faith that I wouldn’t be put forward for the exam until I was 100% ready so that gave me a lot of confidence. It is true to say that you have a lot of information coming at you and it can be a steep learning curve, but it definitely isn’t as bad as you might imagine.

How did the training support you when you were ready to take live 999/101 calls?

Kim: It was scary to being with, but having the tutor there makes you feel less vulnerable. They listen to every single call, ready to step in at any moment, providing prompts when needed during each and every call. I was given feedback after shift and I knew exactly what areas I needed to concentrate on as well as positive feedback which made me feel more confident. 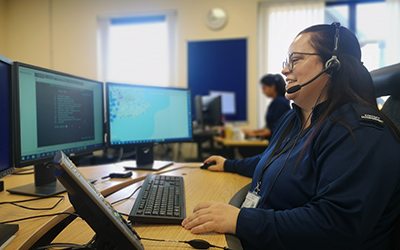 What advice would you give to someone who is looking at coming into contact management as a career change?

Kim: Definitely do not worry about it, it’s not what you would class as your typical apprenticeship – there’s no extra work at the end of the day, it’s just remembering to think about your behaviours on the phone and jotting down those things as you go through your job. I don’t even feel like I’m on an apprenticeship, in a good way!

Lorna: Forget the suggestion of what an apprenticeship is, and think of the word ‘apprenticeship’ simply as a way of getting point a where you’re fully trained in a job you haven’t done before. You have had commitment shown to you, you’re developed as a person, and you’ve had time to gain valuable qualifications. It’s an opportunity to have some really high level training, giving you confidence and self-improvement plus you’re serving your community.

What is the best advice you can give someone considering contact management?

Lorna: It’s just important to recognise that when someone is ringing us its unlikely they are having the best day of their life. Whether that’s a level 1 upset ‘antisocial parking’ or level 10 upset ‘someone has just tried to kill me’ we have to understand that’s the remit we’re dealing with and every person we deal with whether that’s antisocial behaviour or attempted murder- they’re looking for us to help them.

Kim: You get all the training you need; you can be a blank canvas. It’s good to have a bit of life experience but it’s not essential – the training is second to none, you can come not knowing anything about crime or anything about this type of work so if that is concern absolutely do not worry. Everyone has been in that boat, very few people come in here having prior experience of taking a 999 call. If you want to help people and you feel you can communicate then go for it!

What is the main benefit of having your learning accredited with an apprenticeship?

Lorna: I like the idea of having that extra qualification & having the recognition that something had been achieved. Also knowing that in this environment of TVP if you want to push yourself and move on that opportunity is there, if you just say ‘this is what I want to do’ that support is there .

Kim: The fact that you get a qualification at the end of it is really good. It’s nice to know that it’s not just a ‘you need to do this’ it’s a case of ‘you’re actually going to gain something from this as well’.