Nindy made a difference… Could you?

Nindy made a difference… Could you? 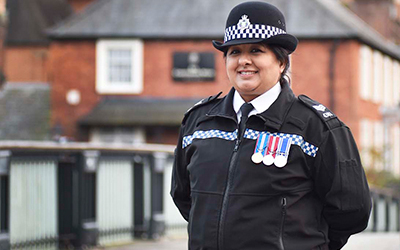 Police Sergeant Narinder Pal Kaur Sidhu (Nindy) has worked for Thames Valley Police (TVP) for over 30 years, as she looks forward to her retirement later this month we spoke to Nindy about her fascinating career and how being a Sikh female and a Police Officer brought invaluable difference to our force.

Nindy, you have had such a varied and long career at TVP; how did it all start?

Honestly, I was infatuated with the TV show The Bill! My brother and sister went to University but I had different aspirations and wanted to make a positive contribution for the community as a whole and do something different with my life.

My supportive family encouraged me to pursue my ambitions, however it was very different back then, as it was almost unheard of for Indian girls to leave home and go to another part of the UK. My parents who were ahead of their time did face some negativity from the local community.

As a force we are working hard on our Diversity & Inclusion agenda – do you feel that coming from a different cultural background has helped you in your career?

It has in some respects, being able to speak Punjabi I was able to help in situations where language was a barrier for members of the public. Even though 30 years ago there was apprehension from some of my peers questioning the validity of me being a police officer, I remained determined and focused in helping the community. Being able to communicate with victims of crime and understanding the difficulties they experienced in reporting crimes enabled me to work towards breaking barriers and giving communities the trust and confidence to engage with the police.

Coming into policing from a multi-cultural background can be difficult; there can be certain expectations from your community such as pursuing ‘traditional’ career aspirations but as the generations change, more people are starting to accept policing as a desired occupation. We have more entry routes now and initial learning is accredited for example with a degree or graduate diploma, which should make it more appealing to a wider variety of people.

As a Force, we are putting more resource and energy into the importance of Diversity & Inclusion, the introduction of a Business Partner dedicated to Diversity & Inclusion and implementing a Positive Action & Engagement Team are positive steps forward. We must continue the great work if we are to have a Force, which truly represents the communities we serve.

How do you feel policing has changed over the past 30 years?

So much has changed, from the recruitment process to the cultural and religious understanding of BAME officers throughout the force and the ways in which the public views policing as a career. When I first joined the service women had to wear skirts, carry a handbag accommodating my pocket size wooden truncheon!

The service has started to make other positive steps in the personal development of our BAME officers who can sometimes lack the confidence in themselves to push forward. I became part of a development initiative called Footdown 1, which was a six-week programme; we explored our strengths and weaknesses. It was hugely important for my personal and professional development.

This was the first time the Force had identified a group of BAME individuals who had the potential to become supervisors and the course was inspirational. It really was a precursor to the Positive Action Learning Sets (PALS) programme we offer today. Thames Valley Police has a variety of Support Associations accessible for all officers and staff. I have been an Executive member of SAME (Staff Association for Minority Ethnic Staff) for many years working towards helping the organisation become more representative of its diverse communities. SAME seeks to promote fairness and equality for all. One of its key functions is to support colleagues from ethnic minorities and help them maximise their individual potential.

You have had challenges throughout your career – what made you overcome them?

When I first joined, I did experience racism and sexual comments – back then policing was very different – you had to be tough to deal with it. At times when I considered leaving, I drew on my resilience and was determined to show that stereotypical assumptions about my culture or me were wrong. I wanted to show the community that people from different cultures could survive and thrive in policing careers.

It wasn’t easy and I relied on my family’s encouragement to keep going – I just thought I am not going to let them win. My goal was to get my career going and make the difference I knew I could.

During your career you made some important contributions to our force and brought about real changes in how we engaged with our minority ethnic communities – tell us about them.

When I first joined Slough as a response and neighbourhood officer, I found it surprising that we didn’t serve all our communities as effectively as we could, due to gaps in cultural and religious understanding. It’s important that you know and understand the community that you’re serving.

I set up a scheme called the ‘Place of Worship Visit’, new officers had the opportunity to visit different places of worship in Slough – we are a large diverse town with Mosques, Sikh Gurdwaras and Hindu temples. I spoke to local community representatives and all new officers began to visit places of worship and to learn about the different cultures. Officers began to understand the different communities they served. It was so well received that Deborah Glass, the then IPCC Director, promoted it more widely and other forces began to implement the programme. This seems so obvious now but at the time it really was innovative.

We also worked with the community and partners, bringing them into our custody suites to see what barriers our officers were facing and giving advice on how we could better deal with those in custody from a cultural perspective.

You were also integral to the forces work around Honour Based Abuse (HBA) & Female Genital Mutilation (FGM). Tell us about that ground-breaking work.

It was through working with partner agencies that I first started having conversations around Honour Based Abuse (HBA) and Female Genital Mutilation (FGM), highly sensitive issues affecting BAME women and girls. I started working in our Domestic Abuse Unit and quickly realised that we had nothing formal in place to better serve these high-risk victims.

In 2001, I put together a system of how to record those crimes and formulated local partnership working – this was a big task that I couldn’t do alone and the changes required support from multiple groups. I raised the issue at the highest levels within the force as this was happening force-wide not just in Slough. I helped write policies and procedures on how we would record HBA & FGM crimes going forward. It was a massive project, dealing with investigation, victim policies, arrest strategies and training packages for officers and staff.

HBA & FGM are very difficult subjects to approach, there was a lot of denial in communities that it was happening. Equally, it wasn’t easy to get training off the ground but quickly people started taking it very seriously. TVP were one of the first forces to acknowledge and put policies in place for HBA &FGM and we taught several other forces our methods such as the MET, West Midlands & Sussex.

The work was recognised nationally by ACPO for best practice but the real pride came from the difference we were making for the victims. I visited schools and spoke to young girls, which was very powerful. We even managed to re-patriate a few victims back to the UK working with the Foreign and Common Wealth Office who had travelled overseas under false pretences, which was complex, but hugely gratifying work – I still think a lot about that today.

Having the benefit of difference, thinking differently, culturally too it meant that I spotted a few areas in which we could vastly improve as a force and I was able to shine a light on those issues. I am really proud looking back on how much I’d managed to achieve and influence. 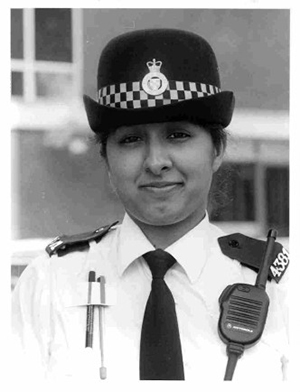 Your 30 year policing career has been so varied…

It really has been, I arrived in Slough as a fairly naïve 18 year old, having never lived away from home before! I started my career responding to 999 calls as all officers did back then, I worked in a neighbourhood team dealing with challenging anti-social behaviour, Town Centre Patrol, Hate Crime Task Force (now our Community And Diversity Officers or CADOs) and Domestic Violence Unit. I have gained promotion to become a Sergeant, been a Custody Sergeant and I’m finishing my career in our Public Protection Unit. It has been hard work at times and I’ve needed to be resilient, but I’ve also had a great laugh, worked with great people. It’s been rewarding and I loved the variety of it all.

So what are your reflections and plans for the future?

First and foremost make sure to spend the extra time with my loved ones. The support from them was the reason why I got to my position now.

My values have guided me through a lot of policing; being honest, appreciating what you’ve got and enjoying life. We always worry about other people’s opinion, but I think it’s important to be true to yourself, just live your life and seize opportunities! I hope I have made a difference!

What would be your parting advice for new officers?

The future of policing is great; I really hope new recruits grab all the opportunities because there is so much available for them now.

My advice for anyone coming from a minority background would be that I’ve done this, so can you. I am a working mum who had a traditional arranged marriage. You can still enjoy your culture with a balanced work life and still be a police officer –there is no reason why you can’t do it. Believe in yourself and go for it!

To find out more about becoming a Police Officer, visit our Police Officer page. To register your interest, please go to our TVP Talent Bank.

For those from under-represented groups considering a career in policing support and advice can be given from our Positive Action and Engagement Team – find out how they could be Supporting You.