As the Positive Action and Engagement Team (PAET) concludes its first year of activity, here we reflect on how much has been achieved.

The team was set up to address and rebalance the fact that Thames Valley Police (TVP) currently does not fully reflect the communities it serves.

The Thames Valley force area has a Black, Asian and Minority Ethnic (BAME) population of around 15%, whilst only 5.7% of TVP’s serving police officers identify as BAME.

For many years, the representation of BAME police officers within TVP has not significantly changed, despite an increase in the diversity of the populations we serve and previous attempts to encourage greater interest.

Our Chief Constable, John Campbell, recognised this and agreed to invest in a Positive Action and Engagement Team, as well as endorsing this change as a force priority within the strategic plan. 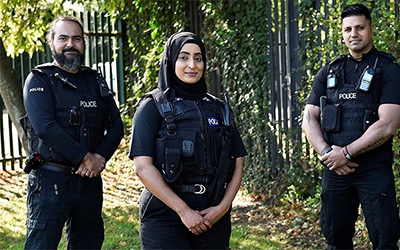 The team has spent the past year engaging and organising bespoke events targeted within our diverse under-represented communities.

They have put on pop-up events at gyms, boxing clubs, supermarkets, places of worship and areas within our diverse communities.

They have attended recruitment events, job fairs and careers events in some of the most diverse areas of our force area. The team has also been supporting candidates from under-represented groups who have applied to join the force.

Student Officer Sanika Mehta, who has worked with the PAET, said: “Before my assessment centre I met some officers from the team. They were all extremely friendly and helpful in answering any questions and concerns, and I would highly recommend anyone who gets the opportunity to engage with them to do so.”

During the Covid-19 pandemic, the PAET’s work has had to evolve, with a number of the services that the team provides moving online and virtual.

During this time, our recruitment process became more protracted and the team has worked hard to keep applicants engaged and informed, with online live events and talks around police careers.

Communication is key and the PAET also recently became active on Twitter so they could share news of their activity, and you can follow them at @TVP_PAET.

On Wednesday 11 November, the PAET attended its first #WeCops chat on Twitter on Diversity and Recruitment. The #wecops chat was a great success, with 163 people contributing towards 913 tweets, reaching 2,877,465 Twitter accounts, and trended at No 7 on Twitter on the night.

This was a testament of the importance of the diversity and recruitment, and the Policing Minister Kit Malthouse also got involved in the debates.

Working closely with the Recruitment Marketing and our Police Officer Recruitment teams, this focused activity has started to show some promising results, delivering a higher level of attraction from BAME candidates than has previously been seen in the force.

The team has also been working with officers and staff already in the force to help with progression and retention.

At Thames Valley Police, we aspire and are working hard towards having a police force that truly reflects the communities we serve.

Our region is increasingly diverse and it is important our workforce reflects this, ensuring our officers, staff and volunteers are approachable and relatable to our communities.

To find out more about the Positive Action and Engagement Team and the work that Thames Valley Police is doing to support access to aspiring people from all backgrounds interested in a career in policing, please visit our Valuing Difference page.