Becoming the difference I wanted to see

Becoming the difference I wanted to see 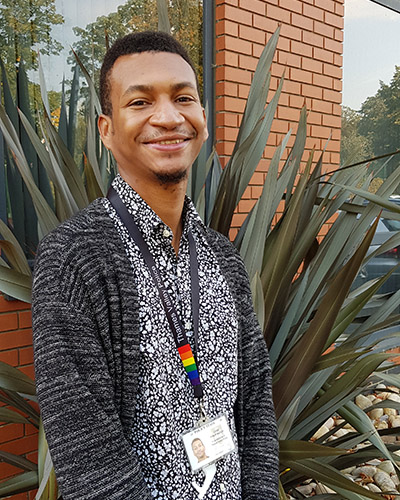 Ever since I was younger, I have been a very theatrical, flamboyant character, and I always wanted to go into acting, so I did a degree in Performing Arts at Oxford & Cherwell Valley College and Bucks New University.

While the performing arts are still forefront for me, I think that in policing you get to see a different side of yourself, a side that is eager to help others.

Why did I choose to join TVP?

I fully believe in being the change that you want to see. I remember I called the police years ago about a personal issue, and whilst I received advice from the police, I felt it was not as in depth as I would have wanted it to be, and this was one of the reasons that pushed me to join TVP. I noticed that something could improve, and I wanted to help bring the changes myself.

I started working for TVP in April 2018 in People Services, but since then I have branched out into volunteering with other TVP departments as a LAGLO+ and a Special Constable.

What is a TVP LAGLO+?

The LAGLO+ team works across various areas of TVP, we get together on a regular basis to talk about problems within our communities, and to find ways in which we can help. We also work to promote the LAGLO+ team, because we feel that not a lot of victims know about us, and for a gay or lesbian individual, it can sometimes be quite daunting to come forward to the police, so we are out there to help those who need our support and to make people aware of our team’s existence.

We are active on social media, and when the Pride months are happening, we are always engaging, trying to get that interaction out there. I think it does really make a difference.

Most of our LAGLOS are LGBT or allies, and for me, it is all about helping each other, just by knowing that we are not a minority. I grew up not really knowing and understanding about LGBT, and I am so glad that this has now been made mandatory to talk about in British schools. It is fascinating to see how far we have come, and I am really optimistic for future generations, I think it will help the next generation of LGBT, because they now have those support network in the forms of LAGLO+, but also that education for them to learn, to read, etc.

I feel like most people outside TVP are pleased to see that representation within their local police force, because it allows them to identify with TVP, and encourages them to reach out more for help. It is very important for me, being LGBT and BAME, that I can move that representation forward.

What is a TVP Special Constable?

Special Constables are Volunteer Police Officers. As a Special, you wear the same uniform, carry the same equipment and hold the same power of arrest as your regular police officer colleagues.

I didn’t realise how much the weight of the uniform can transform you until I put it. I went into the Special role knowing that I wanted to help people, but not really knowing what would lie ahead.

I did my training last year in August, over a period of 5 months, and then I started in January 2020, working with the Neighbourhood teams. In this front line role, I focus on problem solving, patrolling, maintaining police presence, and keeping the community together as one. My friendly demeanour has proved helpful in this role, particularly in managing interactions with the public.

As a Special, I am contracted 18 hours minimum a month, which equates about 5 hours a week and works very well for me.

I would absolutely recommend other people to consider becoming a Special, particularly if they are interested in volunteering and policing. There are many other policing teams within TVP, and you learn a lot about the different aspects of policing; from Roads, ICR, it is really eye opening.

How does my day job as an Administrator mix with my volunteer roles?

The roles I do are very different and although they do not mix per say, they complement each other. I think one of the reasons I looked into the Special Constable role is because in my main HR role, which is a helpdesk, I get in touch with officers asking for support in various issues, and I thought about what it would be like from their perspectives.

I am ambitious, I like to take on challenges, I think that is what I am doing now. Both my line Manager and my Special Sergeant are great and are aware of all my roles. I have never felt overwhelmed, because it is all on my own time. Sometimes it has literally been a case of finishing the day job, putting on the Specials uniform, doing my volunteer work, and then still being able to get home at a reasonable hour to rest. I get a lot of support from both sides and TVP makes it easy to work flexibly.

I feel there are so many opportunities within TVP, there are not just roles for police officers, but a full range of staff roles within various departments, that you can really sink your teeth into, and I think that is what makes a great organisation.

If you are considering joining TVP, either as a police officer, as police staff, or a police volunteer…

All I can say is to take a chance, and if you believe this is something that would interest you, no matter what previous background you come from, absolutely go for it!