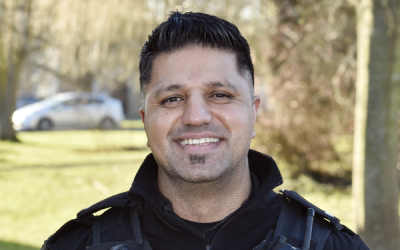 Length of Service: I have 20 years of service across two forces: Greater Manchester Police (GMP) and Thames Valley Police (TVP)

From an early age, 10 or 11, it was always policing for me.  My family was the victim of crime and the police were amazing as they were able to bring the suspect to justice and give us closure.

I attended a sudden death; the deceased was an elderly Muslim man. The family were distraught having lost the head of the family and wanted to conduct the burial according to their religion. Being a Muslim myself and fully understanding the culture and beliefs, allowed me to build a rapport with the family. I was able to empathise but also explain our procedures. I was able to speak in Punjabi. From initially being resistant, the family fully understood the process that had to be conducted; they were grateful, appreciating my knowledge and understanding of their culture and religion.

The past two years have been very productive.  We have worked hard to engage with those from our diverse communities, breaking down some of the barriers they may have considering policing as a career of choice.  Despite the pandemic, we have been able to deliver support, coaching and training to candidates going through the recruitment process. It’s been a good start, but we know there is more to do, particularly encouraging greater interest from our Black African / Caribbean communities.

Advice you would give to someone apprehensive about joining.

It is by the best decision I ever made and I would do it again in a heartbeat.  Please look into this, do your own research.  Reach out to the team.  Ignore the stereotypes and generalisations, if you want job satisfaction, challenging and rewarding career, then be the difference you want to see and join TVP.