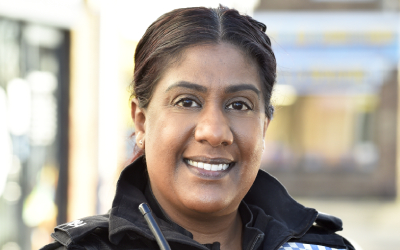 Age at joining: I was 33 when I finally became an officer

Length of Service: 13 years as PC (Police Constable), but I have worked in policing since 1996. I initially joined as a Special Constable, alongside that in 1999 I worked in a Police Staff role before achieving my goal to become a PC in 2009.

Like many of my generation, I grew up watching “The Bill!” I was always intrigued from a young age watching police cars with their blue lights on and wondered what was going on?  I wanted to know, to be involved and to help.

When people are at their worst, as Police Officers we are the light for them.  We make choices and decisions that will affect the lives of people and their families.  For me, it is being able to help people through that difficult period, for the short time we are with them, that makes my role fulfilling.

The force aspires to truly reflect the communities we serve.  I feel that our work goes beyond that.  It has been fantastic to be in familiar places, within communities, who have not had the confidence in policing historically, for a number of reasons.  Showing that we as individuals are not just Police officers, but members of those communities too.  We achieve this in many ways through discussions around serious matters of knife crime, all the way to celebrating the diversity of community events, festivals and gatherings.  The police are the people and the people are the police.

Advice you would give to someone apprehensive about joining.

The team has a wide range of officers, each with their own lived experience and journey.  Do not ever think you are alone, speak to us.  What you think is a mountain holding you back, may only be a molehill.