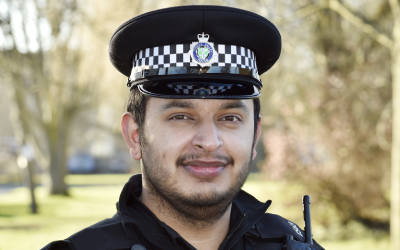 I wanted to do a job, which helped me make a difference and protect vulnerable people. I am one of those people that does not like a person being wronged and I always want to help people at their worst of times.

Why is difference important in policing?

Several areas of our force have large minority populations, but not many officers from different ethnic backgrounds.  Several times, I have been the first officer responding to an incident involving Pakistani families.  The fact I can speak can speak Urdu means that on a number of occasions I was able to understand comments in the background that helped me quickly understand what had taken place, ensuring they concluded quickly.

On one occasion, an incident of domestic violence had taken place and most of the family members lived on the same street. Whilst dealing with the incident, one of the family members was not aware I could speak the same language and made a threatening comment about potential reprisals.  I was able to safeguard the victim and deal with the male at the scene.

Had I not been there, this comment would not have been picked up and it would have put the victim in danger. This sort of thing has happened several times whilst I worked in response.  This shows that diversity is important.

The fact I have been given an opportunity join PAET is a great privilege for me. I wanted to join the team so I could help the force become more diverse in line with the local population. I also want to change the perception people have towards the police in the communities who have not always trusted the police.

Your advice to those considering a policing career?

I would say jump right in and make the move. You will never know what it is like until you have joined.  I was a civil servant before joining the police so it was a massive difference; I have enjoyed every minute and have never looked back.

In your opinion, the best thing about a policing?

The feeling of belonging and no day being the same.