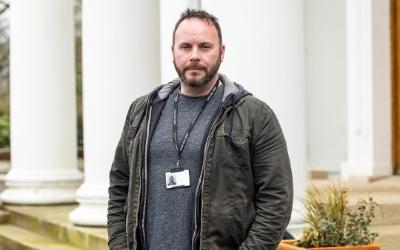 Detective Sergeant Tom Barcham has been in policing since 2005 after leaving the RAF in 2002.

Tom, why did you decide to join policing after leaving the RAF?

What is your job role now?

I am now a Detective Sergeant on a secondment to the National Extradition Unit Manhunt Team. My team specialises in hunting high risk criminals on behalf of foreign governments.

That sounds exciting – have you always been a detective?

No, I have spent a majority of my 16 years in Thames Valley Police (TVP) in tactical roles, such the Armed Response Team, Violent Crime Teams, and Proactive Drugs Teams. TVP provides you with a huge opportunity for different roles within one career.

How has your military career helped your police career?

The attitude and experience you gain from dealing with confrontation and diplomacy in the military has given me an excellent foundation for working in such areas of policing.

It was also hugely important in enabling me to deal with high stress situations confidently and quickly. Having a military background has never been poorly received, and can often be the turning point in a conversation when dealing with difficult or unpleasant people.

What advice would you give to someone about resettlement into the police?

Do it! The transition back to civilian life can be challenging. There is a period of adjustment, but you are well supported by the growing number of former military that are now Officers.

TVP offers a good structure, being former military is well respected and your experiences will often lead to you being a ‘go to’ officer for colleagues and supervisors alike. Do your research, talk to officers, and take the opportunity to have a ride along to see it first-hand.

What is the most rewarding thing about policing?

The colleagues, the experiences – every day is different, and you never know what the next job will be- or how it will end up, but you can guarantee one thing, each job has someone that needs your help, and you can make that difference.

If you are looking at military resettlement into TVP, you can read more about the support available on our Military Resettlement page.