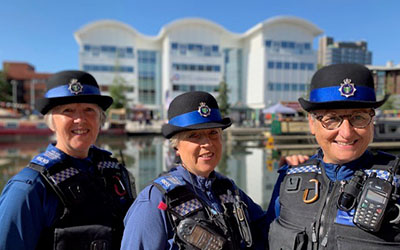 Sue, Rose and Denise (L-R) are now in their 13th year as Police Community Support Officers (PCSOs) in Aylesbury, having all joined the team in 2007.

Sue was 52 upon taking up the role and had worked for TVP in a number of administrative and staff investigator roles since 1999. On her role as a PCSO, Sue said: “The role was new and provided a great opportunity to get out into the community and build relationships. I feel my age ensured I was open minded and had confidence when dealing with a wide variety of people.”

Rose had previously worked in childcare then retail at Boots the Chemist building invaluable customer service experience. Rose joined in her forties and has never looked back; she finds her role incredibly fulfilling and is proud of her 100% attendance record!

Rose can regularly be found patrolling Aylesbury Town Centre: “I can only recall one really scary moment, several years ago now, a protest march got quite heated but colleagues from our Response Team were there to support and take control of the situation with calm restored quickly.” In addition to her PCSO duties Rose is a Deputy Cadet Leader and enjoys working with teenagers.

Denise was 47 on joining and had not worked professionally for 21 years. A mum of four, her family were initially surprised when she chose to take on a full time role as a PCSO but they have been hugely supportive and proud of her ever since: “Bringing life experience and compassion into this role is really important. I love the fact I am doing good and feel proud to have such a rewarding second career. There is no doubt it opens your eyes to different cultures and people from all walks of life.”

PCSOs play an integral role within neighbourhood teams across TVP. They are the face of the police within local communities providing a highly visible and reassuring presence. Unlike their police officer colleagues they have no powers of arrest and rely on their communication, relationship building and problem solving skills.

Sue, Rose and Denise have proved that the role of PCSO can be a hugely rewarding second career and that life experience, people skills, confidence and an open mind really can set you up for success and ensure you make a difference.

Visit our PCSO page to learn more about the role and how you can start your journey with TVP.