On July 22 2019 we were delighted to welcome our first cohort of PCSO apprentices. 19 officers, aged between 18 and 29 have joined us from a range of backgrounds and previous careers including college, the MOD, retail, hairdressing, care work, construction and even a Groom for an Olympic Dressage competitor. This diverse group of new starters demonstrates that modern apprenticeships are increasingly proving as attractive to career-changers as they are to college-leavers.

They are now in the third week of their ten week ‘Operational Learning’ phase at Sulhamstead, getting to grips with their new uniforms and the knowledge, responsibilities and skills required of them. New learning units cover topics including problem solving, evidence-based community policing, minor crime and anti-social behaviour. As part of their apprenticeship, TVP will also support development of their functional skills in Maths and English.

Two of our new recruits were previously Cadets in Newbury and Windsor and are excited to be progressing their policing careers with the force: 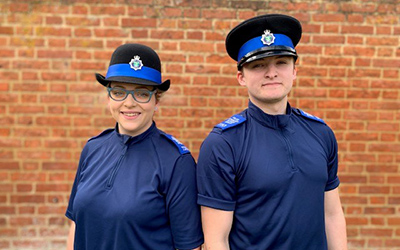 Harry was formerly a Cadet in Newbury from the age of 15-18 before becoming a Leader within his unit. He enjoyed the numerous opportunities volunteering as a Cadet provided him along with the confidence he gained. Harry aspired to join the police full time and is excited to begin his journey as a PCSO, building on the learning he developed as a Cadet.

Lauren was a Cadet in Windsor between the ages of 13 and 18 and like Harry, also progressed to become a Leader. It was through Lauren’s volunteering with the Cadets that she became certain a community-focused career was for her and so a career as a PCSO begins!

We wish all of our new starters every success as they begin their policing careers.

There are no changes to the job role of a PCSO, they continue to play a vital role within our neighbourhood teams. However, the curriculum they will follow through the PCSOA has been enhanced, with the level of learning developing from Level 3 to Level 4 (Higher Apprenticeship, above A-level standard).

To find out more about the PCSOA along with any current opportunities, visit the PCSO webpage or view our PCSOA presentation: