A policing career inspired by mum

A policing career inspired by mum 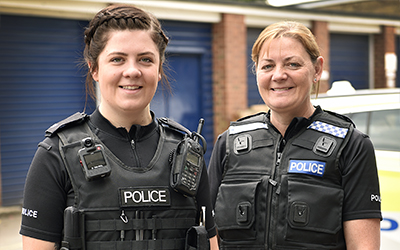 August 13th is a special date in the Dugmore household. It was the day Acting Detective Sergeant Kim Dugmore joined Thames Valley Police (TVP) back in 1990 and it was also the day her daughter Mollie joining the force 28 years later as a Police Constable. As Kim prepares to retire from the force later this month; they reflect on her career, the changes women in policing have seen during this time and look at what lies ahead for Mollie.

Mollie: What attracted you to policing in the first place, mum?

Kim: The desire to help people. I interviewed at 18 but was encouraged to get more life experience, so I did a HND in Maths, Computing and Statistics before eventually passing the interview at 22. I spent 7 years at Maidenhead on response and neighbourhood teams, which was brilliant grounding, and in that time I also had you and your brother.

Mollie: What was it like to join as a woman back then?

Kim: Quite different to now, we wore skirts and our Personal Protection Equipment (PPE) consisted of a mini truncheon which we carried in a small handbag. Female officers were often tasked with dealing with children or women in custody, but genuinely I can say being female hasn’t been a feature of my career, it hasn’t stopped me doing what I wanted.

Mollie: I have already found that too… training was brilliant, my intake was 50/50 male/female and there was no difference in how we were treated. The age range was also broad, from 19 to 52, there was a lot to learn but everyone worked at the pace they needed to. The highlight was definitely my response driving course which I did about 7 months in.

Kim: When did you know you wanted to follow in my footsteps?

Mollie: I always did, but you didn’t encourage it initially, which is why I explored floristry at first. I loved being creative, but soon knew that wouldn’t fulfil me. The customer service skills I had learnt helped when I became a Police Community Support Officer (PCSO) though, it was a great introduction to policing.

Kim: How do you think it helped you?

Mollie: You’re in uniform and people look to you for help. I learnt how to talk to different people, and also how to deal with situations calmly; you start to understand body language and non-verbal signs, which has definitely helped now I’m a response officer.

Kim: You are definitely more confident than I was at your age, you’re strong, hard-working and not afraid to get stuck in. What direction do you think you’ll go towards during your career?

Mollie: For now I’m enjoying being a response officer, I love the adrenaline of responding to a call for help, and your team become like family, everyone is so supportive. You really do learn something new every day and I love having to think on my feet. I’m not sure if a detective career is for me, I’m probably more drawn to Armed Response or some of our Joint Operations Unit (JOU) specialist departments, and they are keen for women to get more involved in these areas.

Kim: That’s the beauty of it, there are so many options you can consider. Things are definitely more equal in terms of opportunities compared to when I joined. 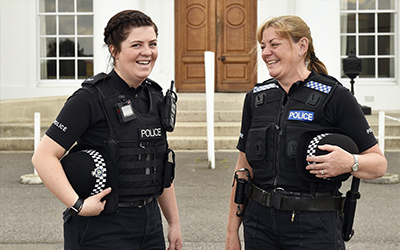 Mollie: But women like you have paved the way for those that follow. I remember always being very proud of you, especially when you came into school to do career talks.

Kim: Yes, one of my favourite roles was as a Schools Officer for Aylesbury, I helped establish the Safer Schools Partnership there which still exists today.

Mollie: You’ve been in and out of uniform a lot!

Kim: I have indeed, in 2003 I took the National Investigators Exam (NIE) and joined Cowley’s Child Abuse Investigation Unit (CAIU) and then Criminal Investigation Department (CID). Ten years later I returned to uniform as a Schools Officer in Oxford. Positively influencing young people is probably what I have enjoyed most during my career. Then I went back into plain clothes as an Acting Detective Sergeant (DS) in our High Tech Crime team, where I was able to draw upon the knowledge from my Higher National Diploma (HND).

Mollie: And now you are finishing your career where you started.

Kim: Yes, for the past three years I’ve been a trainer on foundation training and then on our investigative skills team, training new Detectives. I get huge satisfaction from influencing new Police Officers and Detectives, imparting the knowledge gained over my career and helping them develop.

Mollie: Do you think you’ll miss it?

Kim: Most definitely, I have had an amazing career – yes, I have experienced really tough situations and dealt with some really dark stuff, but I have always felt supported, and the reward of helping others and achieving justice far outweighs the bad. I know that you will always have someone watching your back and so many more opportunities to consider. TVP is a tight, close family and I am proud you’ll be carrying on the Dugmore name at TVP.