“There is massive versatility in a detective career – it really is a career like no other.” 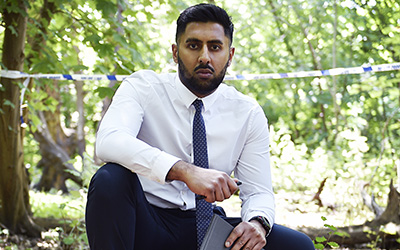 What drew you to policing?

In the past I was never much of a planner, after A levels my mates and I were all heading off to Uni and with no firm career aspirations I opted to study a subject I enjoyed which happened to be Chemistry with Pharmacology at the University of Birmingham. In my final year my Dad asked about my career plans and suggested policing – he had had some professional dealings with the police. So I did some research, spoke to contacts I knew at the Met and decided to give it a go.

The process from application to start date took 9 months. Whilst my application was progressing I worked in a sales job; I hated it – very predictable and monotonous. I am someone who gets bored easily, so it reaffirmed that I wanted a job which offered something different every day, opportunity to engage with people, stability (police officers can’t be made redundant) and decent pay. Policing has so far delivered on my expectations.

After initial training I spent the majority of the next five years at Reading on response. You gain versatility dealing with the many different incidents; everything from bickering neighbours to serious stabbings. I had a great team, a good line manager and learnt a lot. I then decided to go for a new role but despite boarding for it, I was unsuccessful but at that point I was given a mentor. They advised and encouraged me to consider becoming a detective, so I took my NIE (National Investigators Exam) and interviewed successfully for Windsor’s Domestic Abuse Investigation Unit.

What other development opportunities were you offered?

A few years ago TVP introduced the PALS scheme (Positive Action Learning Sets) for BAME officers and I was lucky enough to have a place on the first cohort. It was a brilliant programme and the key thing I took away was the importance of having a plan for my career – so I set about building on my portfolio and taking on additional projects. Two years ago I took my Sergeants exam; I became acting and am now a substantive DS.

What’s the difference between being a detective versus a response officer?

Detectives handle bigger and more complex incidents including attempted murder, kidnapping or high risk cases once they are experienced. Response officers manage initial incidents but then it’s up to detectives to progress the case; building the evidential case file and taking it to court. I probably had some of my best days on response; the spontaneity and unpredictability can be really fun but now I love being in charge of investigations.

How important has good leadership been in your career?

I have been fortunate to have had brilliant line managers who were always approachable, I had a lot of respect for them. Emotional intelligence is so important and as a leader myself now I feel it’s vital to know your team well as individuals – ensuring they have my time when they need it.

What are your aspirations now?

Further honing my supervisory skills, maybe within another specialist department. Over time I’d love to progress to Superintendent and with a career plan now in place that seems possible.

What advice would you give to someone considering policing as a career?

Its sounds cliché but it really is a job like no other. You meet so many colleagues who become friends and personally gain so many new skills and attributes. A lot of the time it doesn’t feel like work.