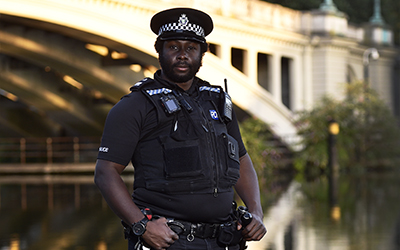 What drew you to become a Special Constable, how did you find out about the role?

I’ve always been attracted to volunteer work. Helping out at church events, working at youth clubs, getting roped into free technical support when people find out I’m good with computers, the list goes on. To this day I’m not quite sure whether it’s an innate sense of duty or I’m just a willing sucker.

I learnt about the Special Constable role by accident. I went on Google and searched “How to become a pilot” but the top suggestion was “How to become a police officer”. There was a webpage with a Police Constable, PCSO and Special Constable side by side and a short blurb about each role. I was immediately drawn to the SC because I saw it as an opportunity to take things to the next level and do some “extreme volunteering”. I put in an application form a few months later.

What did your family think about you joining the Police?

Unsurprisingly, my mother did have reservations about her son joining the police, even as a volunteer. I naively assumed she’d be concerned about me being exposed to violence, death and destruction, which wasn’t the case. But in line with a disciplinarian brand of parenting recognisable to most Nigerians, her main concern was how I would get through all the paperwork with my terrible handwriting.

Looking back, I can confidently say that my poor penmanship was only a slight impediment. Although I do recall a peeved detective once commenting that a burglary I’d given him looked like it had been written by a child. And as a fresh faced 20 year old still trying to get comfortable in my uniform, in many ways he was right.

Having actively served for 6 years at 3 stations in 2 forces, what keeps you coming back for shift after shift?

Part of my drive is the sheer range of work available to get involved in. There’s almost always something new to master and a fresh challenge around every corner.

Nowadays there are a wide range of departments available -if not pleading- for specials to work with. By mastering the basics, getting myself known as a competent officer and showing an interest in the work of colleagues from different roles, the options slowly became apparent.

In my time I have brought down a small fraud ring stealing blank cheques from a secure courier, investigated and charged a man for calling in false bomb threats to 999, leapt out of the back of an unmarked panel van to intercept a county lines drug courier, led a 20-strong team on a cross-border hunt for a local gangster, tackled a suicidal lady trying to jump off a multi-storey car park, and those are just the ones I can remember.

Another motivating factor is seeing the difference I can make around me. Pursuing justice for those that are unable to do so themselves. Being a visible role model to a section of the population that aren’t used to seeing a police officer that looks like them. Being there for people in their times of need and literally saving lives.

I’m also lucky enough to be in a leadership position. A few years ago I was promoted to Special Sergeant, which is a bit like being a real sergeant but without any of the exams or mandatory meetings. What I do have however, is the opportunity to help and support new specials and mentor them through their time in the constabulary. It is equal parts pushing them to be the best they can be, and supporting them through the difficult times that inevitably come up. Over a few years I’ve been able to build an amazing team of dedicated hard-working officers while developing my own leadership skills.

So you’ve gained new skills during your service?

Well in terms of skills, it’s definitely a two-way street. I’ve picked up things like situational awareness, negotiating and decision-making techniques from the police. But I’ve also brought in my expertise working in IT, from trivial things like helping colleagues recover deleted reports to impactful work, like tracking down wanted fugitives using their digital footprint.

Would you recommend the role to others?

As a self-described “career special” I intend to be here for the long run. I started my policing journey in 2010 and during service I have seen numerous large-scale changes to policing as a whole. In that time I’ve proudly watched the Special Constabulary go from strength to strength. When I attested, Specials were half-jokingly referred to as “overtime thieves”, and now we’re welcomed as an indispensable part of frontline policing making use of our diverse expertise.

Everyone has their own individual reasons for joining. It’s a chance to bring a different mind set, to be willing to think out of the box, a chance to be part of the community and part of the police at the same time.

If you have a heart to serve society, you’re the kind of person that can’t turn away from a cry for help or you have a burning desire to bring justice and fairness to the people you serve, becoming a Special is one of the best ways to do it.