Females represent 34% of our serving police officers and 48% of our PCSOs.

Since the first female officer joined the force in 1941, numbers have grown steadily and encouragingly, we are seeing more female officers progressing into senior and specialist roles. Whilst good progress has been made, there is still much to do as we work towards 50/50 representation in all roles across the force.

Meet some of our serving female officers below and be inspired to consider a career in policing! 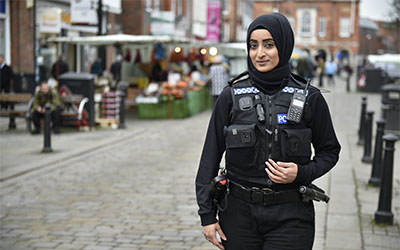 “I have always had a strong interest in policing and completed a Degree in Police Studies with Criminal Investigation at Bucks New University before joining TVP in 2018. My family and friends are really supportive, although my mum had natural concerns as you’d expect, with a daughter potentially putting herself in harm’s way.

“Knowing Muslims are under-represented in policing, I questioned whether I’d fit in but needn’t have worried; my experience has been positive and there are other more senior Muslim officers that I can look up to and be encouraged by.

“I have been open about my decision to wear my Hijab; I wanted to truly represent myself and my beliefs – aside from the odd jibe (which everyone in policing gets) there haven’t been any issues. I speak fluent Punjabi and Urdu which has been useful on many occasions and enabled me to connect with people in a more relatable way, allowing them to open up and build trust. I would encourage other women, whatever their background, to join the police – we have a lot to contribute and sometimes a different perspective can help a situation.

“I enjoy my job and am excited about what my future holds. I aspire to do my detective’s exams and progress into other areas of policing such as CID.” 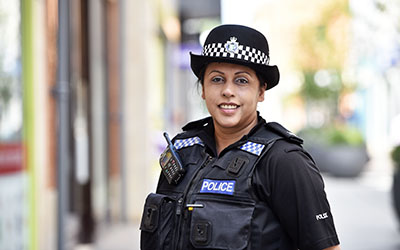 “A family friend inspired me to join West Yorkshire Police in 1995; I had done some work experience first and during that met another Asian female officer and thought ‘if she can do it, so can I’ – from that moment my mind was set. Being a female officer in Bradford was no easy ride but working in such a diverse city gave me invaluable experience and I was lucky to have supportive people around me. My Punjabi and Urdu skills have been useful along the way, helping me engage better with people in a variety of circumstances.

“I transferred to TVP in 2002 and have worked in Oxford City Centre and for a specialist burglary team and am now in Didcot as a neighbourhood supervisor. I love front line policing roles and the partnership work my current role involves.

“Juggling a busy policing role, including shift work and raising a son on my own has been challenging at times but hand on heart my career has been really positive. My son says he is proud of me, which means a lot and you can’t beat the team work and camaraderie.” 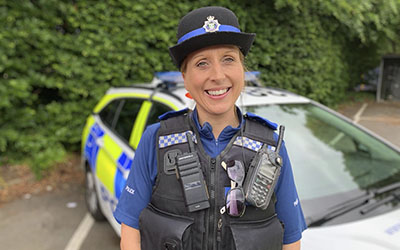 “I have 12.5 years’ service, having joined TVP in 2006. Previously I had been check-in staff for American Airlines, a holiday rep and a receptionist but I wanted a job where no two days were the same and a chance to build positive relationships with people from many different communities and walks of life.

“I love being a PCSO; I enjoy being able to get to know people within the area in which I work as well as getting to know the demographics of Bicester, providing a visible presence and where needed, reassurance. I enjoy being able to spend time with the victims of crime or people that often just need someone to listen to with a hope I can signpost them to the correct support.

“Being a single parent I feel very lucky to have an amazing sergeant who is incredibly supportive. I have never had a negative experience being a female and do find in certain situations it can help when dealing with people.” 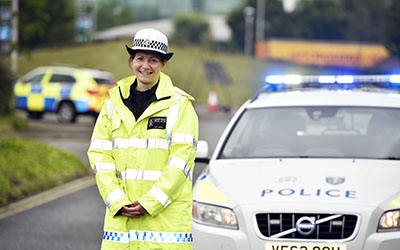 “I joined TVP in December 2003, so have 15 years’ experience which excludes 2 years off for maternity leave – I have two children. I joined because I have a passion for road safety and in 2010 I was able to fulfil my ambition to join our Roads Policing division. I believe people should be able to use the roads without having to fear they may be involved in an incident that could lead to tragic consequences. I was a member of IAM (Institute of Advanced Motoring) before I became a Police Officer, and still am today!

“I enjoy making a difference to people’s lives, especially those that are involved in fatal RTCs. I currently work on the Serious Collision Investigation Unit, and am a trained Family Liaison Officer.

“Being a female police officer is becoming easier as time goes on, especially having support groups like the Women’s Network available and having other female colleagues to talk to. I would recommend this career to other women as it has lots of different departments you can work in and specialise, plus it also has the possibility for you to progress if you wish to.”