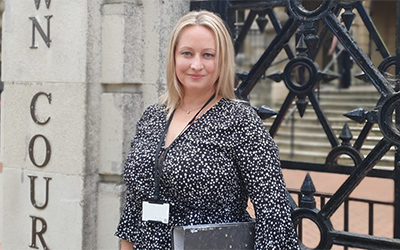 What attracted you to policing? When I was in my teens at school, a local neighbourhood officer came to do a career talk at my school, listening to that career talk made me think that if my original career choice as an equestrian wouldn’t be successful, policing would be really interesting.

I am Australian born, and in my early 20s had the opportunity to move back, but I felt I needed to find my own way in the world. I decided I wanted a job that had career security. Where I’d know how much I was going to be earning and that was going to be varied from day to day. I couldn’t bear the thought of a career that was going to be the same day in day out. Teamwork was also important for me, policing ticked all these boxes.

How did your career in policing progress? I have had a varied career so far; I started as a uniformed police officer, becoming a sergeant at just over three years in service. At that time there weren’t quite as many women in policing and I think because I’ve got quite an assertive, extrovert character, I was encouraged by my line managers to seek promotion. After my promotion, I was a custody Sergeant for 20 months, and then a Prisoner Handling Sergeant, where I became interested in investigation. Not long after I was approached to join the DAIU (Domestic Abuse Investigation Unit) as a detective, which I decided was the right next step for me. I did four years in DAIU, and then transferred to CID Priority Crime Team which looks at serious acquisitive crime; burglary, robbery, Class A drug dealing and other crimes. After three years, I moved to CID’s main office, where I am today.

How has it been like to work in these different departments CID (Criminal Investigation Department, DAIU, PCT (Priority Crime Team)?
In DAIU, I took a lot of pride in breaking the cycle and proving to victims of domestic abuse that actually there is a better life out there away for them. It’s hard to break free from an abusive relationship, so for me it was building the trust and belief in the victims to actually have them realise that they were entitled to safety and happiness. In CID, you get a sense of euphoria when get that piece of evidence that will lead to a conviction, as most of the time you deal with serious violent crime, including criminal on criminal violence, and you really want to make sure your work makes a difference.

Sometimes the victims won’t engage with you, so you need to carry on with your case, and if successful in securing charges, many times the victims come forward and engage, as they no longer fear reprisal from the perpetrator/s.

This goes across the board for all of the departments I’ve been in, it’s when you put your heart and soul and commitment into an investigation and it gets charged. It goes to court and then the defendant gets convicted and the sentence really reflects the crime as well. That’s a great feeling. That gives you that job satisfaction and reminds you why got into it.

In addition, working in departments such as DAIU or CAIU allows you to work closely with partner agencies (e.g. social care, education, local authorities), do strategy meetings; I am quite proud of the positive working relationships I’ve built with the heads of departments in many organisations.

What would a day-to-day look like for you as a detective? You have your cases to investigate and whilst you know you get given time to progress those, on a day to day basis you can come in and if a job happens while you’re on duty or it’s happened overnight, you may have prisoners, you may have victims to debrief, so you need to be adaptable and get the job done. You’ll have golden hour enquiries to try and secure enough evidence to get a positive disposal; if it’s an unknown suspect at the time the offence is committed, you know you get several fast time enquiries to trace their identity, which can be quite high adrenaline. If someone has been a victim of a serious crime, your passion is to find out who did it and bring justice to the victim.

You also need to manage your own expectations and realise that sometimes cases can take a year or more, if the victim is supporting and you have the evidence you need, but other times it can take much longer, due to a number of factors, such a lack of evidence, protracted enquiries, and external material. Most importantly, you need to be and remain professionally curious, you have to look at everything you have and everything that points away from your case as well, because otherwise that can take your case apart at court. It’s about having that dedication and professional curiosity.

What would be the next step in your career? I plan to take my inspectors exam in October; for me, career progression in the police means you’re really only competing with yourself and the work life balance. I’ve sought policing as a career because I wanted something I could get my teeth stuck straight into and where there was career development. And of course, the variation in opportunity and day-to-day life here – it’s a career for life for me.

What skills have you been able to develop throughout your career as a detective?
The ability to develop my communication skills to meet different audiences; you learn to adapt your style when meeting people in different states of emotional distress, low mental health, low mood. You get to form bonds and increase the confidence with people that perhaps previously have had low trust or belief in what the police can do for them. You also learn to engage with partners and present at strategic meetings.

What makes a great detective? Everyone has a slightly different style, but I think people skills, adaptability, and good communication skills. You need to be good at adapting your style of communication to get the best information from your audience. Many victims of serious crime come from difficult backgrounds and you need to be able to understand that. You need to have humility and compassion for the people, and being able to utilise the right support from within TVP and the partner agencies to provide them the best service.

What skills do people need to have to be a good detective? An eye for attention to detail, tenacity, resilience, commitment to starting, and wanting to see it through and be proud of the end product.

What would you say to someone considering becoming a detective? If you want to be proud of the work you do and have a varied roll, where the opportunity for career development and variation is plentiful, and where you can develop transferable skills, go for it!
Being a detective gives you a broad range of skills in many different arenas can help you develop your career progression within policing and further afield.