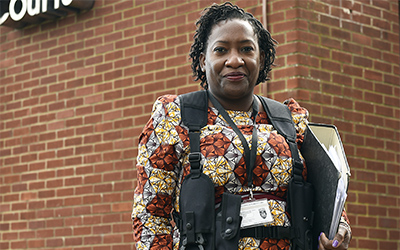 Why policing? I grew up in Zimbabwe were I had an idyllic childhood. Age 10 I did something silly and took a lipstick without paying for it, the Store Manager called the police and my parents. As a scare tactic they showed me the cells, it might seem extreme but it worked – from then on all I wanted was to be in the Police. When at age 16 I started researching my future career, I found the height restriction was a minimum of 5’ 6” which I was clearly never going to achieve as I was 4’ at the time. When I came to the UK at age 18 I saw and appreciated the difference in the way we police here; police by consent, no corruption and more importantly for me, no height restriction.

Career prior to policing: Because of procedural issues between governments, vetting took longer, in the meantime I worked for a Borough Council, supporting drug rehabilitation and Youth Support work – all jobs which helped prepare me for public service and policing.

Your career path to investigation: I was an ICR officer for around 10 years were I had a tasking team attachment, worked on the Prisoner Handling Unit (PHU) with a bit of a maternity leave thrown in. In 2016/17 I undertook a focused development programme TVP’s Positive Action Learning Sets (PALS) where an interest in a career in investigations as a detective began to grow. In 2017 I passed the National Investigators Exam, it took some time but eventually my progression into Crime Investigation was supported and following a four month Force CID Attachment from January 2019 my detective aspirations became a reality. I have now been a substantive Detective Constable in Domestic Abuse Investigation for two years, it’s been a steep learning curve and an incredibly busy two years. My career is living up to expectations and I now have Sergeant aspirations, which are being actively encouraged and supported.

Have you felt supported during your development? There have been struggles both personal and professional. Being dyslexic has sadly, inhibited my progression. I sometimes get overwhelmed by too much email content and need more time to work through things. This wasn’t always recognised but support has improved in recent years, including technical enhancements for my computer. Having good line management and peer support has also been important, I found getting a mentor and a coach invaluable. I am very passionate about empowering and supporting individuals, particularly colleagues from ethnic minority backgrounds as an active member of SAME our force Support Association for Minority Ethnic staff. I have supported several new and experienced officers over the years both formally and informally, including reverse mentoring one of our Superintendents. I am also a member of The Women’s Network as I am equally as passionate about developing women and in the words of Madeleine Albright; “there is a special place in hell for women who don’t help other women”.

How important is the diversity you bring to policing? As a black female DC with black siblings and raising mixed race children, I am aware of how disproportionately over policed the black community is, I want to be part of the change – it is important all our communities are represented in policing. I was lucky to be part of a cohort of student officers where 5 out of 20 were from ethnically diverse backgrounds, however when I joined my Local Policing Area (LPA) I was the only black officer at the time. I am proud to be a bilingual English and Shona speaking Zimbabwean woman. I style my natural hair in traditional Zimbawean micro-locks and I also proudly wear Zimbawean African traditional clothing to work. I have been able to use my Shona skills in the job, it has helped create connections, helping me make a difference and being part of that difference. I have been in rooms with colleagues saying they have never seen or witnessed racism in their careers – when I was a victim of it on most Friday and Saturday night shifts in the town centre for nearly 10 years! Having supportive line management who are happy to have the dialogue with me and help educate others is what has kept me in the job and increased my love for it. Again in the words of Madeleine Albright; “it took me quite a long time to develop a voice, and now that I have it, I am not going to be silent”.

What would you say to encourage and/or reassure other women or those from Black, Asian or Minority Ethnic communities considering a career in the police? I would encourage other women including those from ethnic minorities to apply! It is a highly fulfilling and challenging role with guaranteed career progression should you want it. I would advocate a mentor and coach to achieve their best potential as we cannot do this alone! Yes there may be some poor management and issues, but there are also plenty of good leaders and support available. I leave work every day knowing I have made a difference and in the absence of an abundance of Black role models for my two girls, I make sure I am that role model for them!