Let us take you back to 1996; a year when Oasis and the Spice Girls ruled the charts, England reached the semi-finals of Euro ’96, John Major was PM and the tragic events in Dunblane broke the hearts of the nation. It was on 19 February of that year that three young women started their policing careers with Thames Valley Police and formed a friendship that would last a lifetime.

We recently spoke to them all about their careers and how important that friendship has been along the way.

What drew you all into policing in the first place?

Rebecca: I had always wanted to pursue a policing career; I had a strong social conscience, was community-minded and volunteered a lot in my younger years. I was a Special during my degree so had some understanding of what was involved before fully joining the service.

Emma G: Interestingly, none of us were from policing families. Having studied History at Reading I knew I had an inquisitive and enquiring mind. Meeting two really inspirational officers at a careers fair sparked my interest and I was drawn to the ability to help people and make a difference as so many of us are.

Emma B: I studied Biology and Bio-Chemistry at Sussex University which included a Forensic Science module, but I was drawn more towards a broader policing career. Whilst waiting for recruitment to open I spent six months on a Supermarket Grad scheme, even though it was interesting it confirmed my wish to work closely with the community.

Can you remember that first day and what were your aspirations at the start?

Emma G: We were on a cohort of 12 – 5 women, 7 men. It was quite different back then; women were given a mini truncheon, handbag and had to wear skirts. I think I can speak for us all when I say none of us had any firm career plans or aspirations at that stage.

Rebecca: Culottes were trialled unsuccessfully for a time!

Emma G: Back then we had parades and uniform inspections. Rebecca had been a Special and I remember her giving us lessons on how to ‘bull’ or shine our boots.

Rebecca: Yes and the Public order uniform we wore was designed exclusively for men.

Emma B: It was quite overwhelming and the focus was very much on learning the job and getting through our probation. None of us appreciated the scale of the opportunity that was available to us, we were all very open-minded. 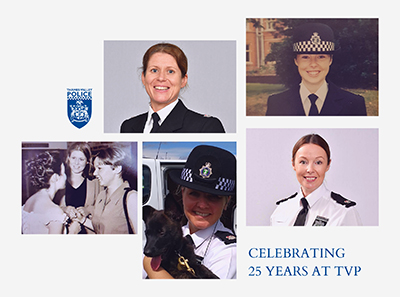 What was it like when you joined your Local Policing Area (LPA)?

Emma B: I felt really welcomed. There hadn’t been any new recruits for over two years so the teams were fairly experienced and provided a really supportive learning environment. I didn’t experience any negativity, however there were already some women on my team which I think helped.

Rebecca: We were lucky as we got posted to the same LPA together, just on different shifts.

Emma G: Yes, it was a really positive experience and I have very fond memories of my early days in Wycombe. I still keep in touch with my tutor now. There was the odd sexist or provocative comment, which most would put down to ‘banter’ but this was all before the ‘Code of Ethics’ which we work to now and I would feel more confident to challenge now than I did then.

Some women are worried about physical conflict in the job, what would you say to that?

Rebecca: I have had two occasions where I was seriously threatened, but confrontation is part of the job. You’re trained for it and have the equipment for it, you have to trust the techniques and know you have a team around you who have your back – our biggest weapon though is communication, the ability to talk to someone and defuse a situation.

Emma G: Given the nature of policing there is a risk of conflict and confrontation and it is understandable to feel nervous but my size/build has never been an issue and as Becky says your voice is your biggest asset.

You’ve all had quite different career paths haven’t you?

Rebecca: Yes, I have worked on every LPA in one way or another. I quite quickly became a DC moved into our investigation (detective) world, working in the Criminal Investigation Department (CID) and PVP. One of the most privileged roles I have had was as ‘Post Incident Manager’; being involved with officers after a serious incident, facilitating any investigation and ensuring they had the right support. I then went back into Local Policing before my current move to lead PVP.

Emma G: I worked as a Neighbourhood PC at Wycombe and loved it; in fact I’ve worked in neighbourhood roles at every rank. I also worked in Oxford on Response and in CID. I spent several years out of uniform leading the ‘IRIS’ team which was a pre-curser to the Integrated Offender Management work we do now. Prevention is a real passion for me and the work we did was in collaboration with other partners such as the Home Office – even presenting at Downing Street. I learnt lots about the Force whilst working in the Criminal Justice department and recently benefited from an opportunity working in Surrey & Sussex. My current role is my favourite job so far.

Emma B: I was also a Neighbourhood PC at Wycombe, those early years helped build my confidence and the importance of building a network of assets in the community to help us to our job. I then moved into the detective world and have also undertaken roles within Neighbourhood teams and in the world of Performance. Changing LPAs regularly gives you a good, broad view of the force and I am proud to be LPA Commander of Wycombe, back where it all began for us.

Having risen up the ranks, did you ever feel a need to be anything other than yourself to ‘get on’?

Rebecca: Sometimes I felt others may have wanted me to be a different version of myself, but I never wanted to compromise me. You’ve got to be true to you, genuine.

Emma G: I agree, no one should have to change themselves fundamentally in order to progress.

Emma B: I totally agree with Emma and Rebecca, you need to be true to yourself and be clear with what your values are as they will definitely assist you as you move through the ranks.

How did you navigate career and family?

Emma B: For me, providing solutions definitely helped. Myself and a colleague took a job share idea to our management at the time when my children were young – it was a new approach then but a can-do attitude and a willingness to make it work ensured it did.

Emma G: Balancing career and family isn’t easy but I have been a single parent now for several years and it is possible to juggle both – you just have to have a positive attitude and look at what you can do, not what you can’t. Know when to switch work off and focus on family.

How has your friendship evolved over the years and has it ever felt competitive?

Emma B: Never competitive. Luckily we’ve never gone head to head for a single role. We’ve moved into different ranks at different times. We’ve been a great peer support for each other with the ability to have honest, frank conversations and give each other confidence to take the next step when it was right.

Rebecca: Yes, really supportive. We live in different areas of the force but try and meet 2/3 times a year, Covid notwithstanding! Often when we do the last thing we talk about is work.

Emma G: We’re great friends who trust each other, and can call upon each other to get really honest advice. I have a great pride in how we have all done.

What advice would you give new female officers starting their careers?

Rebecca: Always enjoy what you are doing and go outside your comfort zone. Seize opportunities.

Emma G: Take the opportunities that come your way, at a time that is right for you and believe you can.

Emma B: You are your only blocker to opportunities, have confidence in yourself and go for it. You might surprise yourself. Also don’t underestimate the support that is available.

On behalf of everyone at Thames Valley Police, we thank you for your hard work and dedication. Congratulations on 25 years of service!

If you have been inspired by their story and think you could make a difference, helping to keep our communities safe, please consider becoming a Police Officer with Thames Valley Police.

For those from under-represented groups considering a career in policing, support and advice can be given from our Positive Action and Engagement Team. Find out more about how we are Valuing Difference.