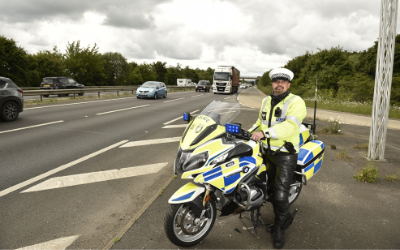 From Police Officer to Police Sergeant in our Roads Policing department, we recently caught up with our colleague Mark Scully about how he is realising his potential in policing.

Is this the path you expected to take in your career?

I took and interest in Roads Policing (RP) because it was a joint role with firearms in the force I originally joined before transferring to TVP but found I really enjoyed the work. When I transferred to TVP I kept looking at the RP route. It’s always been something I have loved doing so in a way, yes, but when you first start to some extent you haven’t got a clue about how many options are available.

How do you feel you are ‘realising your potential’ in your policing career?

This can mean different things to different people, but some would look at realising potential as being purely rank focussed but I would say it isn’t. The great thing about the police is that there are so many opportunities, especially as a Constable or Sergeant. Regardless of role or rank, I strongly believe you are ‘realising your potential’ when you do something you love, when you make a difference where you can (both inside and outside of the organisation) and do it to the best of your ability.

What do you love about your role?

I personally think I have one of the best jobs in policing. I have more responsibility, autonomy and training to do things than many other roles and ranks. I am an accredited Lead Investigator for Fatal and Serious Collisions, a Pursuit Tactical Advisor, Advanced Police Driver and motorcyclist, and have responsibility for reducing road deaths, denying criminals the use of the road and keeping people safe.

Everyone will use the roads in some form or another and we keep them safe and moving. Getting justice for victims and families of victims for the harm caused by those who do not consider the safety of others on the road is a great sense of achievement, as it is with any role in the police.

I also get to do something called Bikesafe www.bikesafe.co.uk/thamesvalley. I love doing this because it is bikers talking to bikers about keeping themselves safe on the road. We get to interact with motorists in a positive way, without turning on the Good News Lights.

In addition, our Roads Policing department is part of the Joint Operations Unit (JOU) between Thames Valley Police and Hampshire Constabulary, and there are times we work with other forces for cross border matters. Everyday offers a different scenario.

I also get a kick out of helping officers develop, either towards a career on RP or those who want to move on to different things. Supporting officers through difficult times is also rewarding in a different way.

What do you think about the range of opportunities available in policing?

You can pretty much turn your hand to anything in the police. Roads Policing might not be for everyone, but there are a variety of innovative ways you could prevent or investigate crime: Detective, Firearms, Counter Terrorism, Surveillance, Drone Pilot, Rural Crime, Motorbike, Public Order, Method of Entry, Negotiator, Intelligence, Child Abuse Investigation, Domestic Abuse Investigation, Major Crime, I could go on.

Do you still have ambitions for your career?

The downside about being in a great role that you love doing is that the motivation to ‘progress’ is not as great. You can do so much as a Constable or Sergeant, as highlighted above, things that might no longer be available once you climb the ranks. I still however have ambitions around some things I would like to see implemented from a Roads Policing and Road Safety perspective. The short answer is yes I do, but ambitions do not necessarily mean moving sideways or upwards.

What would you say to some considering a career in policing?

Do it. I have the privilege of having done and seen things that the vast proportion of people will never do or see in their lifetime, not always pleasant, but mostly rewarding. I believe I have made the community safer, saved some lives, protected some people, moved a few from the wrong path, locked up some that needed to be and done some good.

It’s also a very different job than it was when I joined, and anyone who does join deserves the support of everyone within the organisation. There will be difficult days but with the right people around you, they will be all the more worthwhile.

I’d also say ignore the negative noise that is made about policing – Policing goes through cycles where it is popular and where it is not, where it is paid better and where it is not. It is however always needed. We need good people joining and anyone willing to do so gets my respect, and the respect of the majority of the public. There really is no other job like it, ignore any detractors (from outside or inside the job) and do it.

Thames Valley Police (TVP) is actively looking for people to be the difference they want to see in their communities, as we re-open Police Officer recruitment. To find out more about a policing career with TVP – including the realities of working on response, initial training, and to register your interest to become a Police Officer please visit our Police Officer page.