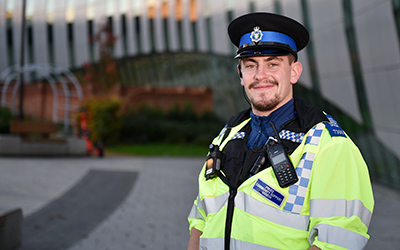 Will Jones is a 22-year-old Police Community Support Officer (PCSO), who joined Thames Valley Police on 22 July 2019. He completed 10 weeks initial training at Sulhamstead, followed by 10 weeks of tutoring on area at Slough, achieving independent patrol status from 29 December 2019.

On 6 May 2020, at the height of the COVID-19 pandemic, whilst out on independent patrol PCSO Apprentice Will Jones approached a group of men playing cricket in a Slough park, who were clearly breaking COVID lockdown rules by gathering.

As part of our COVID-19 public response all frontline officers had been briefed to Engage, Explain and Encourage members of the public to comply with the restriction guidelines set out by the Government, and Will was happy to approach them under the circumstances.

The group then began verbally abusing, laughing and taunting him, and subsequently stole his police bike – several members of the group filmed the interaction and posted it on social media. Will stood his ground, remained calm and professional, keeping his composure throughout the whole incident which for any experienced PCSO could have been very intimidating, never mind for a young 22-year old in his first year of service – he never once lost his professionalism.

It is worth highlighting two points at this time; firstly that PCSOs do not carry any personal protective equipment (compared to their Police Constable colleagues), they rely on their communications skills to defuse situations – the group were circling Will and putting phones in his face. In addition, Will has autism, and despite his personal boundaries being pushed to the limit that day, he was able to rely on his training and non-confrontational approach to ensure that things did not escalate.

The footage went viral and was viewed on multiple platforms thousands of times; it was picked up by the media and covered on local news and across several prominent national newspapers including The Sun, Daily Mail, BBC, Mirror, Independent, Metro and Slough Observer. On one site alone it has been viewed over 3,700 times and attracted over 1,500 comments. The perpetrators were identified by the images they posted on Facebook and Twitter and were subsequently arrested and put before the Courts.

Will’s response earned him many positive comments and compliments about his conduct, and we feel he deserves special recognition for his composure, professionalism and dedication to his role. He is a credit to TVP and the uniform. The situation was a steep learning curve for him, reinforcing the skills taught in training but also building his confidence in dealing with situations.

When asked about his apprenticeship, Will said: “My apprenticeship is going great; there have been a few delays due to Covid and the higher amount of jobs and projects that I have been involved in, but I’m nearly finished with my diploma work, with only my portfolio to finish.

There are many things that I like about it; each shift has had something unique, with all jobs being different. I have met the best of the public when out and about, showing support even in the most difficult of situations, and even when I deal with the more challenging members of the public, it makes the job both interesting and exciting. I have faced many surprises during this job and that has mostly been when I’ve been out on patrol and being the first responder to many incidents.

However the very best thing about this job are my colleagues, they have never failed to support me when I needed it and even when I didn’t think I would need it. When it comes to treating the newer people to this job, I think about how I was treated by the more experienced colleagues when I was new and try to replicate that.

I would certainly recommend anyone to join, especially those who either want to be involved in the more community based side of policing, or those who are unsure if they would want to be a police officer, as this would be perfect experience for that.”

If you have been inspired by Will’s story and think you could make a difference, helping to keep our communities safe, please consider becoming a PCSO or Police Officer with Thames Valley Police.