“I am driven by achieving justice for victims and wanting to help them.” 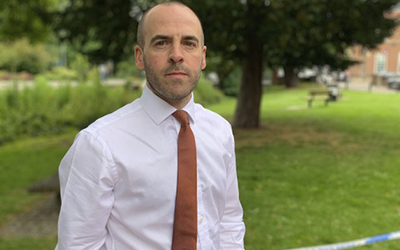 Did you have a job before the police?

Previously I was a personal trainer and gym instructor in South Wales. I loved working with people, helping them achieve their goals but ultimately found it quite repetitive and not enough of a challenge. Through work I met a few police officers, they spoke positively about their job and how no two days were the same, that encouraged me to look into it.

You’re from South Wales, how did you end up at TVP?

I wanted to look further afield and heard good things about TVP as a force for training and development, I applied and was successful. This meant relocating to Slough but I welcomed the opportunity to go to somewhere new. Slough is one of the busiest areas of our force, the grounding I got there was fantastic. I spent four years on response and went on multiple courses including response driving, public order and CBRN (Chemical, Biological, Radiological, and Nuclear) – which meant I could be called up to respond to specific events.

What motivated you to become a detective?

Honestly, when I first joined the police I didn’t consider being a detective at all. About three years in I joined a special vehicle crime team which used covert techniques to catch offenders – I found myself wanting to follow cases through rather than pass them over to detective colleagues, so I decided to make the move into investigation.

What was the process to become a detective?

You have to take your National Investigators Exam (NIE); studying for that around your day job isn’t easy but you have to focus on the end goal. In order to become fully accredited you have to build a portfolio of evidence demonstrating your breadth of investigative experience, again not easy to balance alongside the day job but you have great support along the way.

What does doing your job well mean for you?

I am driven by achieving justice for victims and wanting to help them. In my first detective role I was on Priority Crime Team (PCT) dealing with lots of burglary and robbery, whilst that type of crime might seem low level you are often dealing with people who haven’t had any contact with the police up until that point and it can feel very personal to them if their home has been ransacked. Helping them get some sort of closure following a terrible event feels very rewarding.

What other skills have you developed as a detective?

There are so many opportunities to continually develop your skill set. As I mentioned, I initially worked in PCT, then progressed to CID where the crime is more serious like assaults and rape, then most recently I worked in Major Crime where you are dealing with the most serious offences including murder. I am a qualified Family Liaison Officer (FLO) which meant a week’s course at our training centre in Sulhamstead – it’s probably one of the most difficult roles to do, because you are meeting people at probably their lowest points and going on a journey with them, developing trust and a rapport. I am also a Tier 5 interviewer, with the experience to strategically plan and co-ordinate how we approach interviewing suspects on a case.

What qualities make a great detective?

Being a team player is important – having previously worked in sports I have always loved being part of a team. You also have to be open minded and prepared to work hard – it’s a job which requires dedication.

What would you say to someone considering the career?

Go for it. It can be very rewarding and there is something different every day. Crimes may be similar but the way we approach them in order to catch offenders can vary immensely. In 14 years I have achieved so much and developed so many skills – I am currently an Acting DS and now really keen to gain my promotion so that I can start to pass my experience and knowledge on, helping new detectives to succeed.