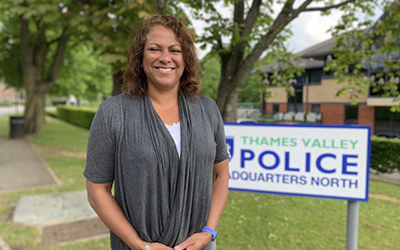 What inspired you to join the police?

It sounds clichéd but the TV show The Professionals in the ’80s – the role of detective looked action packed and exciting.

Did you have any work experience prior to joining?

I considered being a lawyer and after my degree I worked in Social Services, having interactions with solicitors there made me realise I wanted to serve the public from the perspective of the police.

What are your early memories about joining?

I was terrified initially. I wasn’t initially confident in approaching and speaking to people as someone in authority, that skill took time to build. Policing definitely developed my assertiveness, it didn’t come naturally at first.

I spent 5 years on ‘shift’ now called ‘response’, this time really helped develop my basic policing skills. Then 4 years in local policing as a ‘beat officer’ was really enjoyable – I loved getting to know people in my area and problem solving. I then moved into child protection and in 2006 completed my Detective course. I then had opportunity to work on a number of teams tackling various serious crime including sex trafficking and prolific offenders. I then moved to the Major Crime Review team which I am on now.

What do you enjoy about being a Detective?

Being a detective you get to see a job through from start to finish and I love having a problem to solve. In my current role I love having the time to do a good job and patience plays a big part in that.

What does your current role in the Major Crime Review Team involve?

We work on cold cases – mainly historic murder and rapes, the oldest case I have worked on dated back to 1966. These cases can sometimes involve ‘double jeopardy’ which is a relatively new and complicated piece of legislation which demands that the evidence being relied on is new and compelling in order to apply to the DPP to reinvestigate a case and apply for the quashing of an acquittal. You get to work collaboratively with lots of specialist departments including our forensic providers and technical support. The enhancement in forensic science has been huge in the time I have been in policing. Thames Valley were the first Force to have a successful double jeopardy conviction and in fact we’ve now had three. You get huge job satisfaction, as the victims’ families know TVP hasn’t forgotten them.

What has been your most memorable case?

A recent double jeopardy murder case, the suspect had been found not guilty originally back in 1994. Based on new evidence they were re-arrested in 2015 and went on trial again in 2019 – new compelling forensic evidence resulted in a conviction and they were sentenced to over 20 years in prison. It’s a testament to how the officers in the original investigation handled the evidence and preserved it that we are able to successfully revisit and re-examine the material and make new findings, achieving justice for the victim and their family.

How has policing worked with your family life?

I have raised two children during my time in the force; they are now 20 and 18. I was fortunate enough to be able to job share during their younger years and the flexibility definitely helped manage the demands of the job and family.

What qualities do you think make a good detective?

What would you say to anyone considering a career as a Detective?

Do it! The job itself is so diverse and you develop so many transferable skills. Over time people find their niche like I have – I really feel my role has evolved as I have over the years. Now my role is slower pace, more about the detail, but back in the day I loved the unpredictability on response.

If you have been inspired by Jacqui’s experience we encourage you to contact TVP’s Positive Action & Engagement Team: positiveactionteam@thamesvalley.pnn.police.uk