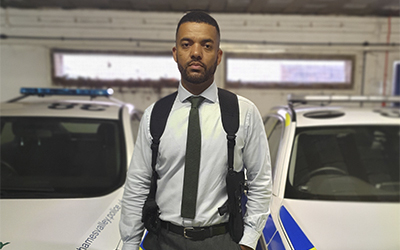 Length in service: 12 years; I initially spent 3.5 years as a Police Community Support Officer (PCSO), I then became a Police Officer and worked in an investigative role, and over the last 3 years I’ve been in a Detective role.

Why policing? After college I knew I wanted to join the police, I sought advice and initially joined as a PCSO before moving into a Police Officer role. I was attracted by the structure, the community aspect, speaking to people, to the responsibility of the role and the accountability also. Most importantly, having that opportunity to impact people’s lives in a positive way.

Why did you decide to become a detective? As a police officer, I was able to learn from a variety of experiences; from working on shift, within a proactive team, on a tutor team, and with CID. I realised that becoming a detective would be a natural step, the investigative side of things always sparked my interest. So I applied to become a detective, I took my exam and passed it. Now as a DC, I realise that my previous experiences have helped me massively, particularly when people come and ask for investigative advice.

What’s it like to work in CID (Criminal Investigation Department)? It’s full on! On CID there is a variety of different investigations and as a detective you need to learn how to triage in your job. With policing, you get new jobs constantly, so it’s ensuring that you progress and give everything the amount of time it needs, keeping all your investigations moving forwards whilst managing the daily demand, it’s a balancing act. There are no quick wins, detail is important – everything needs to be topped and tailed, because a lot of the time you are dealing with very vulnerable people. We also often get asked for advice or oversight from shift officers or superior officers.

How does your day-to-day job as detective look like? You never really know what you’re going to be doing when you come into work; you might be able to work on what you planed, but sometimes those plans can be turned on their heads if a new case comes in. On a daily basis, I work in an office with a team of three DCs, an Investigator and a Sergeant; we might be deployed to deal with whatever comes in, be that a sudden death or serious sexual assault or serious injury. The level of involvement we have varies, from giving investigative advice, taking on ongoing investigations, to working from beginning to end on a case.

You have to work hard to get here; we deal with a variety of incidents, we support our colleagues whenever possible. I feel it’s a privileged role and I thoroughly enjoy working here.

What skills have you developed after becoming Detective? I always thought I was quite good at interviewing and investigation, but being a detective takes you to that next level. You learn from your specialised training, but in addition, you learn from those around you. It’s allowing yourself the space to be an investigative thinker, and you will develop these foundations once you become a detective.

It’s that eye for detail, what to look for, the investigative mind-set; sometimes you go to a scene and your colleague might see something completely different, so it’s keeping an open mind to all those additional possibilities.

What makes a great detective? Being a good communicator, having patience, confidence and an eye for detail.

With patience, for example, there will be times when reviewing extensive amounts of material with just a fraction that’s relevant to the case, however, it has to be done without losing the level of alertness and eye for detail.
You will need to have the confidence to challenge people in interviews, when you are dealing with suspects, and most importantly in your own knowledge of the law.

Leadership is required too, as you will often have people coming in and asking questions; you need to be able to point that person in the right direction.

What advice would you give to someone considering policing and becoming a detective? Try to experience it, go for a ride along, try and get some experience because it is a job like no other; you can sit with someone and they can describe it to you, but I don’t think you’ll ever really get it until you experience it.

If you’ve got an inquisitive mind, you’re generally good at talking to people, and you’re not afraid of confrontation, being a detective could be the role for you.